Tuberculosis (TB) is an infectious illness caused by the airborne bacteria Mycobacterium tuberculosis. TB can cause serious health problems – particularly if it is not caught early. But the illness is curable, and testing and treatment are free and confidential in the UK, regardless of immigration status. 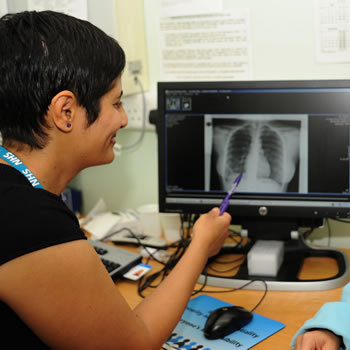 What parts of the body are affected by TB?

TB in the lungs or throat (pulmonary TB) are the only forms of the illness that are infectious, which means it can be passed on to other people. However, TB can also affect any other part of the body, including kidneys, brain or bones. This is called non-pulmonary TB – and is not infectious.

How is TB spread?

When someone with TB in their lungs or throat coughs or sneezes, they send droplets into the air that contain the TB bacteria. If you breathe in these bacteria over a long time you may become ill with TB. But most people won’t get ill because:

What is drug-resistant TB?

Drug-resistant TB can occur when TB bacteria become resistant to the two most powerful antibiotics normally used to treat the illness. This means the TB is more difficult to treat and treatment will take much longer (usually at least 18 months).

How common is TB in the UK?

TB cases in the UK have fallen again to around 5,000 cases annually, after a two-decade rise that began in the late 1980s. However, that is still too many for a disease that is preventable. Most people are successfully cured with a free course of treatment.

What is the TB picture globally?

Every year, around the world over 10 million people are diagnosed with TB, and 1.6 million die of the disease. This is mainly because they cannot get the drugs that would make them better.

Find out more in our patient information leaflet, Tuberculosis: your questions answered Despite giving up smoking and a course of antibiotics, Louise’s chest infection did not clear. She went to her GP